This month we welcome Melanie Anderson, Cr. Photog., CPP to Tallahassee! Melanie is going to be teaching us all about her fabulous Senior Model Program – Marketing, pricing, photographing, workflow, and timeline! If you photograph seniors or have been wanting to add it to your business, you won’t want to miss this one! 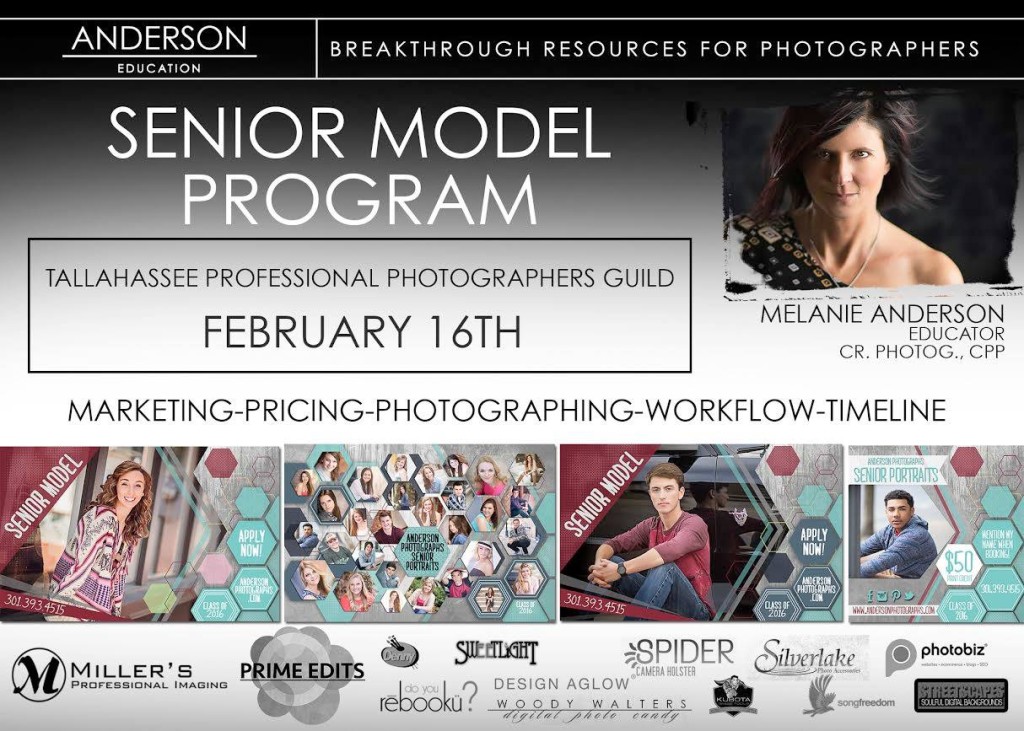 “We believe in creating visionary works with a passion for the community while placing family first, developing our craft and educating others”

Melanie is a wife to her husband of 20 years, Bill, and a mother to their 4 children, Sarah, Emily, Kayla and Billy –She has nurtured Anderson Photographs from a home studio into the 3000 square foot custom photographic studio, specializing in Seniors, Children, Newborns, Families, Volume Sports, and Boudoir, located in the Arts & Entertainment District in downtown Hagerstown, MD.

It is no surprise that even though Melanie is primarily self-taught, she gladly undertook and overcame the challenge of becoming a Certified Professional Photographer in 2011, and received her Craftsman Degree in February of 2015. Throughout the process, she continued to run the business as well as Speaker for Shutterfest, monthly contributor to Shutter Magazine, mentor for After Dark Education, go on tour with Sandy Puc and appear on SPTV. Along with being the Vice President of the Maryland Chapter for PPA, teaching at SEPPA and several State PPA Chapters, and last year filmed several segments for Photovision. Melanie stays passionate about one-on-one mentoring and works diligently to provide educational resources to fellow photographers through Anderson Education; which includes webinars, eBooks, videos and workshops.

Her awards and achievements include the following:

Don’t forget to bring your 8×10 prints to compete. Attendees who opt out of print competition will pay a $5 meeting fee. Print competition rules can be found at http://tallahasseephotographers.com/print-competition/